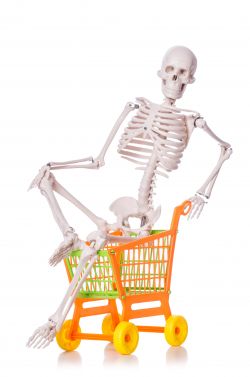 For Immediate Release: October 1, 2015
CONTACT: James Miller This email address is being protected from spambots. You need JavaScript enabled to view it., (850)701-3015

“Even though the national survey shows a decrease in spending on Halloween this year, we don’t expect that trend will hold true in Florida due to the many positive economic indicators showing the continued strength of our state’s economy,” said FRF President/CEO Rick McAllister. “Recent consumer confidence remains high, real estate continues to surge and state revenues continue to increase, all pointing to a healthy 2015 for retailers and consumers.”

Consumers celebrating Halloween plan to spend an average of $27.33 on costumes for the whole family, and a total of $2.5 billion on store-bought, homemade, large and small costumes. Those celebrating will spend the most on adult costumes ($1.2 billion), and will spend a total of $950 million on children’s costumes and $350 million on fashionable and fun costumes for their furry friends. It’s estimated that 68 million Americans will dress up this Halloween and another 20 million pet owners will dress up their pet.

Nine in 10 (93.7%) Halloween shoppers will buy candy, spending a total of $2.1 billion, and an additional 33.5 percent will buy greeting cards, spending a total of $330 million. Two in five celebrants (44.8%) plan to decorate their home or yard, meaning there’s no question consumers will see their fair share of pumpkins, hay bales and even life-size Minions and black cats strewn across their neighborhoods. The average person planning to buy decorations will spend $20.34 with total spending expected to reach $1.9 billion.

When it comes to how consumers plan to celebrate, most will hand out candy (67.8%), or dress in costume (43.5%), though there will be no shortage of jack-o-lanterns lighting up windows this year with 41 percent of people planning to carve pumpkins. Nearly one-third of consumers (31.5%) plan to throw or attend a party with friends and family.

More consumers have decided to head to stores or shop online early to pick out costumes and decorations. More than one-third of consumers (34.1%) will start their Halloween shopping before the first of October, up slightly from 32.1 percent last year, while 40.9 percent will get started in the first half of the month and one-quarter (25%) of celebrants will wait for the final weeks of October.

Similar to past years, the majority of consumers will find inspiration for their costumes online (31.4%) or will head to costume shops and retail stores (26.8%) before they make a final decision.

ABOUT THE FLORIDA RETAIL FEDERATION The Florida Retail Federation is the statewide trade association representing retailers -- the businesses that sell directly to consumers. Florida retailers provide one out of every five jobs in the state, pay more than $49 billion in wages annually, and collect and remit more than $20 billion in sales taxes for Florida’s government each year.