Law Enforcement Officer of the YearSince 1974 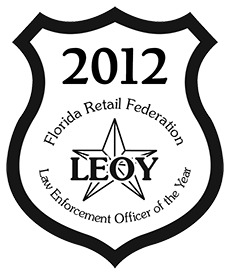 (TALLAHASSEE)  -  Detective Sebastian Monros of the Miami-Dade Police Department was named Florida Retail Federation’s (FRF) 2012 Law Enforcement Officer of the Year (LEOY) recently for his outstanding work in the field of financial crimes. He received a check for $3,000 and an attractive custom-crafted medallion and plaque when he was honored at FRF's annual awards dinner on October 16, 2012, at the Renaissance World Golf Village Resort in St. Augustine, Florida. His name has been added to a plaque that lists each LEOY recipient since the program’s inception in 1974. Sgt. Marcos Martinez accepted the plaque on behalf of the Miami-Dade Police Department, where it can be displayed for the next year. Dennis Wamsley, director of loss prevention for Publix Super Markets, Inc., and chairman of FRF’s LEOY committee, made the presentations on behalf of FRF’s nearly 8,000 member companies. He was assisted by FRF Chairman of the Board Paul Imbrone, vice president of legislative affairs, Macy’s, Inc. A contribution was also made by FRF to the Fraternal Order of Police Memorial Foundation on behalf of the Miami-Dade Police Department. The Foundation maintains a permanent memorial and sponsors a memorial service each year in the state’s capitol to commemorate Florida’s law enforcement officers killed in the line of duty.

Detective Hilary Bledsoe of the Orlando Police Department was selected as the Runner-Up. She was also honored at the October 16th event where her nominator, Sgt. Amy Ameye, accepted on her behalf.

Two officers received Honorable Mentions for 2012, and are being honored locally: Special Agent Mabel Lezcano of the Florida Department of Law Enforcement and Detective Ryan Miller of the Palm Beach County Sheriff’s Office. As a member of FDLE’s Economic Crimes Squad, Special Agent Lezcano’s dedication to the criminal justice profession has helped her successfully disrupt crime organizations that prey on retail establishments and others. She has been employed by FDLE for eight years.   Detective Miller, an eight-year employee of the Palm Beach County Sheriff’s Office, works proactively to build partnerships between law enforcement professionals and the business community to help fight Organized Retail Theft.  Among other initiatives, he hosts quarterly Organized Retail Theft meetings, uniting public and private sectors, and has created reporting guidelines for loss prevention personnel to assist in the prosecution of Organized Retail Theft cases.

“Each of these officers contributes significantly to the retail community and to Florida’s citizens as a whole,” says Richard A. McAllister, FRF president and chief executive officer. “The Florida Retail Federation is proud to continue its 39-year tradition of recognizing Florida’s law enforcement professionals. We are grateful to the service and contributions of all of the outstanding nominees from throughout the state.”

Detective Monros has been a fraud investigator with the of Miami-Dade Police Department’s Economic Crimes Bureau Special Investigations Section for nearly two years. In this capacity, he focuses on crimes such as credit card and check fraud, counterfeiting, embezzlement, identity theft, organized crime, account takeovers, and extortion.

Crimes of fraud are a multi-billion dollar a year industry often involving organized groups, career criminals, and gang activity whose actions can severely impact Florida’s retailers. Financial crime investigations, however, are complex and time consuming. They require a high level of dedication, perseverance and attention to detail in order to bring the cases to a successful conclusion. Detective Monros possesses such special qualities that make him successful in these types of investigations. He works diligently to establish positive relationships between financial institutions, government agencies and retailers to help combat these crimes.

One example of Detective Monros’s work during the past award period includes him observing a trend through his assigned cases in which individuals were using stolen personal information and counterfeit credit cards to establish false memberships in wholesale clubs. “Paid shoppers” would use the counterfeit cards to purchase items, and then sell them to several stores in the Miami-Dade area. Working cooperatively with other agencies and retail personnel, Detective Monros was able to identify more than 30 criminals who were participating in the crime scheme. In another case, Detective Monros also helped a retail chain identify and arrest an individual who conducted more than 101 fraudulent transactions at the chain’s multiple area locations. These transactions involved 28 separate victim accounts and more than $360,000 in losses to the retailer.

“Whether it’s having your identity stolen or credit card comprised, victims of financial crimes know firsthand how difficult it can be to get assistance,” says McAllister. “Having dedicated public servants such as Detective Monros on the case is a real benefit to every business and every citizen of the State of Florida.”

Detective Monros began his law enforcement career with the Miami-Dade Police Department in April 2008. He remains drawn to the profession through its sense of purpose and the opportunity to give back by enforcing the laws and helping victims. He joins 42 previous LEOY recipients who represent various branches of law enforcement including police departments and sheriff’s offices, the Florida Department of Law Enforcement, the Florida Highway Patrol, and the former Florida Marine Patrol.

As a member of the Orlando Police Department’s Criminal Investigations Division, Detective Bledsoe is dedicated to the complex, focused work required to successfully investigate financial crimes. A few of her many accomplishments this past year included helping crack down on illegal telemarketing businesses that targeted timeshare vacation owners all over the country, which were stealing millions of dollars from their victims. She also helped break up a large-scale counterfeiting operation involving the sale of designer-branded purses, accessories, shoes and perfume to small businesses and flea markets. Items seized carried an estimated retail value of $6 million to $8 million. In another successful investigation, Detective Bledsoe helped the retail community by uncovering a scam in which a hotel employee was purchasing theme park tickets with guests’ stolen credit card numbers, then an accomplice was selling them online.